Build yourself a Virtuous Cycle

Although we may deny it, we all live under the laws of sowing and reaping (also known as the laws of karma), whether we believe in it or not. This law states, “as you sow, so shall you reap multiplied, 30, 50 and 100 fold” Obviously if you plant wheat you will reap wheat and if you plant thistles you will reap thistles! The crop has no feeling for you but you certainly have feeling for it! The thistles don’t even know you exist as you reap them with your bare hands, causing you much pain and anguish! Nor does the crop of wheat know you exist – it just IS! But you feel no pain reaping wheat, in fact you feel joy because here is a crop that is going to feed you and your family over the coming winter!

The virtuous cycle always begins with Good Written Goals. Unwritten goals are simply wishes, and wishes seldom come true. Written Goals are the higher form of affirmations (which are sound based goals) because they are Light based. With sound based goals the words come out of you mouth, go into your ear and then bypasses the conscious mind to go straight to the subconscious mind, where they sit awaiting a second goal to match the one in the word/sound department of the subconscious goal department! Until the second department is filled with the same goal nothing happens because it is not complete! (“a house divided can never win“)

To complete the goal we have to use the principle of light. And we do this by writing the thought down on paper as a written goal. The eye sees the goal and it bypasses the conscious mind and goes straight to the second subconscious goal department, to match up with the sound goal. When the two match (say the same thing) the goal is then passed onto the super-conscious (the soul) which hands it out to the universe for fulfillment! And that is how we plant the seeds of success. Of course the best way to ensure a positive return is to reverse the normal cycle of goal settings (sound/ light, word/vision) so it goes Light/Sound, Vision/Word. We do this by writing the goal and then reading it aloud so both departments have the same goal! This ensures it is sent out into the universe A.S.A.P. and the results also come back A.S.A.P. 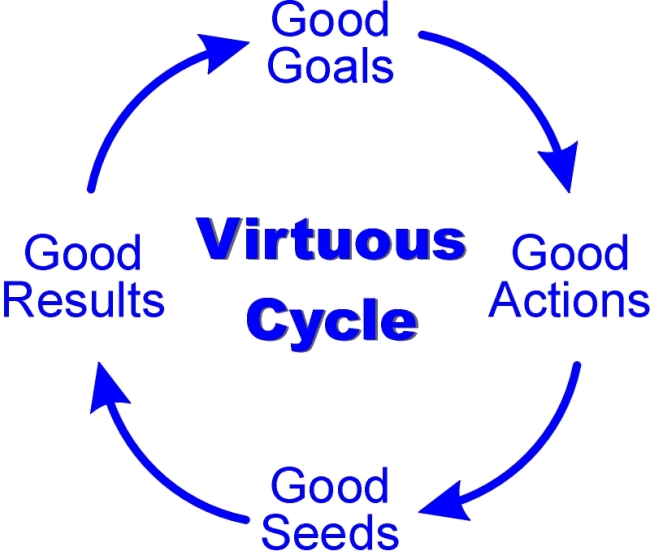 To complete the goal in the negative/vicious cycle we need to do what? Nothing! We simply do nothing – not setting any written goals or speaking any affirmations. This is like a farmer going into town and drinking his life away in the pub and expecting his land to plough and plant itself! It just doesn’t happen. Instead weeds(fast growing unwanted plants) take hold and start growing. When the farmer turns up at his farm in reaping season, he finds his fields full of thistles that have to be pulled out by hand (he’s traded all his machinery/tools and protective gear to buy alcohol!) a very painful process for him. 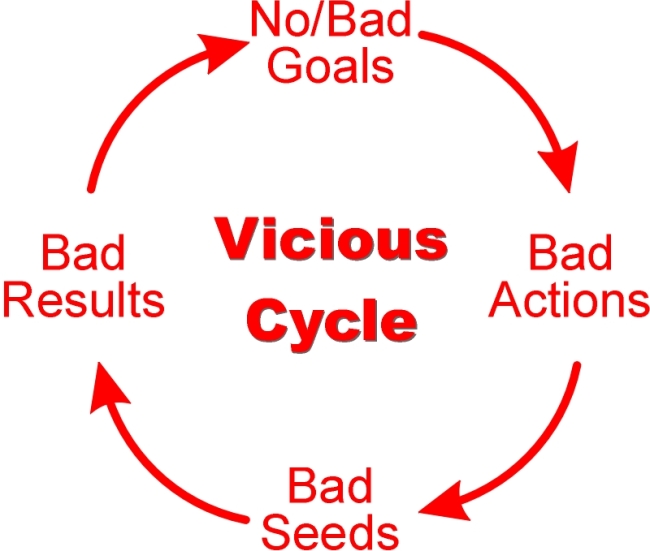 So life itself is fairly simple in it’s execution. But it is far easier to do nothing than to do something, which is where we get the saying, “everything that is hard to start up becomes easier and easier to live with, whilst everything that is easy to start up becomes harder and harder to live with!” It takes thought, effort and commitment to plough the land, plant the seeds and look after them until harvest (especially the first year as you have no experience!). The second year is easier than the first because you have learned from the experiences of the last year. By the time you come to the fifth season it is all automatic, all internalized! And the crops are becoming bigger and bigger as you learn what are the best growing techniques!

The end result of multiple virtuous cycles is a state called prosperity.

Prosperity is one of the two “Big” states. The other, the bigger state. is called Peace. Peace and prosperity go hand in hand with each other. They are actually inseparable if you want to Be whole. To have prosperity without Peace is not a life. To have peace without Prosperity is not a full life. The two synergize (spiritually harmonize) together to produce a much higher state than either separate state! This is called a wholistic state (holy in the Bible).

The reason for this has to do with the way we are created. Each of us is created with different talents and abilities. We have 80% of our internal selves in common with everyone else in the world. It is this 80% that creates the General Divine Civilization. It is the 20% that creates our own Specific Divine Civilization. My 20% is the Wholistic Peace and Prosperity Network. I was the first choice of starting this organization up because I was created differently in the areas where it was necessary, by God! If I had refused the task, it would have been given to someone else and I would have died an empty man. As it is, I am a very happy man because i am helping to create a specific divine civilization! The true answer to heaven on earth lays with helping to create a specific divine civilization – your own unique part of it!

I will be writing more on this subject, so keep your eyes peeled!

If you have any specific questions you want answered, please email me and I will answer them for you.