← i think i’ll pass on that!
$1,025 the magic turning point for spiritual abundance →

As a child my life was remarkably religious free! I never attended a single christening, wedding or funeral (Hatch, match and Dispatch) because my family were isolated from the larger family by moving 12,000 miles from England to new Zealand. We couldn’t have been physically further away. Also the only reference I heard to the father son and holy ghost was “Daddio, Laddio and spook!” from my father in a joking way (army humour)

And then we were isolated by the fact that my father was in the army and I spent 8 years of my childhood in an army camp called Waiouru, that was physically isolated from the nearest town by 20 miles and in the middle of a volcanic plateau. And of course no religious people were allowed to teach in Waiouru – only the tamed religions that allowed warfare, the catholics and the church of England.

I didn’t attend one children’s religious class in 8 years and that was fun, filling in the pictures with crayons. I don’t think they were actually allowed to teach any religion directly in Waiouru. I do remember singing an army based song of “I may never march in the infantry, ride in the cavalry but I’m in the Lord’s army!”

And that basically was my association with religion in my childhood.

Not that I didn’t have spiritual experiences. Like falling backwards out of a tree, going into an altered state and seeing my young life flash before my eyes! Or having an altered state experience of seeing the sky as a dome with Mount Ruapehu and the sun just painted onto it. And staring at the sun that appeared to be like a big copper ball.

So my life was not without spiritual experiences. But I was kept magnificently separated from all religions as that was part of my path in life that lead to my royal rebirth at the age of 28.

The next big step came when I was 14, going on 15 – the age of spiritual freedom when I would be able to make up my own mind about spiritual choice and make a commitment. I was in third form of college and I had a wonderful science teacher who always said, “Don’t believe what I say, always test it in the test tubes and see if what I say is true. By testing it you will be able to get repeatable results and KNOW it is true!” I highly respected this teacher!

Then at the end of the year we were to be given religious instruction, and Mr ******** was chosen to do it. He started spouting off a lot of stuff that I didn’t understand (and I don’t think he believed either) so I put my hand up and asked him where the proofs were for what he was saying. He came up to my desk in a rage. Leaned over me and said, “You don’t need proof, you have to believe what I’m saying!” Wow! What a reversal! I instantly decided to become an atheist to protect myself against the dogma I was being fed! Unfortunately I also threw the baby out with the bathwater! I threw God out with the dogma! But it was all part of the isolation plan put in place by God/the Universe etc Himself to protect me for my rebirth. I spent the next 7 years battling the system by being an atheist.

The next big spiritual event came when I was 21 years old(notice the seven year gaps starting) when I drowned and passed over to the other side in what is called a Near Death Experience (NDE). Even though I experienced this amazing event I still remained an atheist for another seven years! Why? Because I didn’t ask to connect to Love/God! Unless we ask of our own free will we will not meet with I Am – the knowable essence of God. The strange thing is that I still had spiritual experiences and, as an artist, people always said my work was “Very Spiritual!” Which puzzled me no end! Lol!

Now the three states of happiness are (1) contentment (2) Joy and (3) Ecstasy and Bliss. And the three states of unhappiness are (1) discontent (2) Depression  and (3) Self destruction. As an atheist I gradually sank lower and lower down the unhappiness ladder until, at the age of 28, I reached the edge of self destruction. With nothing to lose I awoke to ask God if he existed (at all?) Within 6 months of asking this question I was reborn into the Holy Spirit (I Am, the Christ Spirit) in a massive WHAANG!!!! Lol! And that was the beginning of my second part of life. To be continued…. 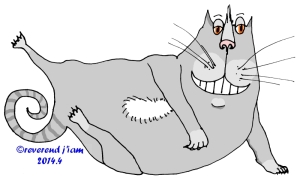 ← i think i’ll pass on that!
$1,025 the magic turning point for spiritual abundance →