← The order of Love in the universe
God is my Provider! →

Come and join the pathfinders to create a new system, revealed by God (I Am) in 1992.
The pay is initially lousy, but the rewards are enormous – Love, Happiness, health, peace, success. and prosperity (plus much more). Notice how the pay is initially in the currency of Love – Contentment, Joy, Ecstasy and Bliss! Once we have these things, then the money starts to flow!
We have to be truly happy to be abundant/wealthy, otherwise we just descend into riches, which are actually a spiritual state of poverty. Why do you think the rich man asked Jesus how to become wealthy? Wealth is riches with happiness. There is no happiness in riches, they are just a burden to the man, “what profits the man to gain the world and lose his soul?”
Everyone knows we don’t live by bread alone. We are icebergs and the extent we show to the world is controlled by the size of the iceberg under water! The only way to grow our iceberg is to serve God, I Am and Love, to help create a Divine Civilisation! This is what I am offering you here!
Every one knows the old trees are falling, come and tend the young shoots, new trees, waiting at the base of the trees, just biding their time! These new saplings are the future of the forest, the nascent divine civilisation promised by God!
We are the gardeners tending those plants whilst everyone else runs around like headless chickens screaming, “The trees are falling, the trees are falling! We are all doomed!” Hardly! We are all promised a new forest, the “likes of which mankind has never seen before!”
J’iam 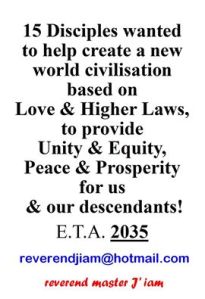 ← The order of Love in the universe
God is my Provider! →