Okay, in this modern industrial age, when nothing is considered wrong or right and the world is suffering under a flood of euphemisms, I’d like to point out that the vast majority of the “opinion makers” (press, politically correct) are simply peddling Poo!

Of course there are right and wrong ways of doing things! The concept of absolute freedom from laws of the planet and laws of the universe is idiotic. Imagine if the rot spread to the laws of the road and everyone decided on the day what side of the road to drive on – that’s one way of depopulating the planet!

People would die on the roads as they drove on the left, the right and in the middle and sides of the road at their whims! Personally I wouldn’t drive on the roads to pick up the injured if I was an ambulance driver!

In this mad world of no right or wrong, people could save money by flying to wherever they want by flapping their arms – no need of aeroplanes any more!

The list of insanities goes on and on. But the insanities are fewer and fewer as we rise out of the physical realm of facts to the metaphysical plane of principles. There are literally billions of facts. But there are only hundreds of metaphysical principles. And all facts can be linked to a principle!

Most facts by themselves are not useful. But tied to a principle they do become useful! Facts tied to principles are reduced from billions to hundreds! Much easier to handle, by far!

But what say you could tie the hundreds of principles to only less than 20 Super-Principles? Well, you can do that too. You simply have to move up out of the metaphysical plane to the Spiritual Plane, where the super-principles are called the Higher Laws!

Why are they called higher laws? To separate them from man’s so called laws – which are really just rules and regulations. Man’s law has very little natural justice in it. Man’s laws can be bought or perverted by trained people who spend there time lying or looking for loop-holes in man’s badly written rules. These specialist, in perversion of man’s laws, are called lawyers, and if you can afford them, you can escape even murder!

If man’s rules don’t get the murderer during his life time, then God’s higher laws come into play the moment he dies! Imagine the murderers distress when he finds he has to climb the spiritual equivalent of Mount Everest in the next world – wearing ice skates!

And the fact that it may take a million years to achieve! And the double distress when he is shown how he could have been placed only two feet from the top during his lifetime of 70 years – if he had only listened!

There is a right way and a wrong way, no doubt about it! “The wages of sin are death.” the Bible says. Sin means to be using the wrong, or no, tools! The opposite of sin is discipleship. To be a disciple means to be, “A follower of the method!” To be a follower of the method means to use the right techniques, follow the law, do the right way. There is nothing hard about success, we just just have to do the right things! 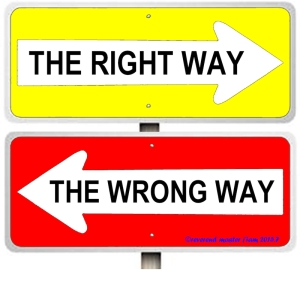